7:00 am, Idomeni: Last night our activists managed to slip into the camp to examine the area. Only a few people remain, evacuation is done. Just in two days, the Greek Government deported thousand of people to other camps that seem worst than Idomeni. An old warehouse’s roof is not enough to make this operation “humanitarian”.


One of these places, where migrants have been deported, is inside the industrial area of Sindos, in 4 abandoned hangars. Migrants tell us the conditions inside are awful: dirty floor, water infiltration, family tent are spacious, but dark and the air is stagnant. There is a little courtyard, but it’s not possible to move the tents outside. There are 18 bathrooms for 600 refugees, drinking water is supplied only in bottles. No information about future or asylum process. A press release informs that the process will start in few weeks.

8.30 pm, Idomeni: Police tries to evacuate the area where activists and refugees are protesting against deportation and against removal of activists and press. There were clashes between people and police and press can’t film the demonstration. [ watch the video ]

8:00 pm, Idomeni: In this moment activists and refugees are demonstrating against deportation in militarized camps, against evacuation of independent volunteers and against removal of activists and press. People are blocking the way to Greek-Macedonian border.
Watch the video [ 1 ] – [ 2 ] – [ 3 ] – [ 4 ]

1.00 pm, Idomeni – Tommaso has just left the camp. The sweeps of the undercover cops were increasing and the people still inside are few. Most likely before night the operations of deportation will be over.

12.30 am, Idomeni – Bulldozers are clearing the area where the infotent and the “No Border WiFi” were. From Calais to Idomeni, the solution of the European governance to the request for protection and welcome of refugees is the banishment in military camps. The public opinion must not see with their eyes that there are men, women and children made rightless.

11.30 am, Idomeni – We’re still in the camp, moving from one tent to the other in different areas of the camp. The camp is surrounded by the police and many undercover agents, some of them disguised as migrants, they’re entering in evry tent. The purpose is to move away the last volunteers and activists like us who managed to stay inside the camp.
Now we are moving to avoid getting noticed. Meanwhile the bulldozers are levelling also the central part where there was the last group of refugees. It is very likely that the operations of deportation will end tonight. This eviction is handled by the government as a humanitarian action, completely distorting the meaning of this word: they left them without services and food, what’s happening is a deportation of people against their will. Without the massive use of police forces, bulldozers and psychological pressure, they would have never left Idomeni unless to continue their travel towards the north.

9.45 am, Idomeni – An activist from the Overthefortress campaign is still present in the camp. He’s a nurse and he’s doing his best to help as much as possible while hidden amongst the tents. At the moment doctors are not allowed in the camp, even if there still are thousands of people stuck here. We personally met toddlers with fever and pregnant women, but who knows how many others are in the camp. While it is possible to say that till now the eviction of the camp is happening without resorting to violence, nonetheless it is clear that it is occurring displaying an enormous quantity of violence and abuse. Bulldozers are in action since yesterday to clear the ground and restore order; the camp, although being a harsh place, gave the opportunity to people to self-organize and establish relationships of mutual help, paradoxically it allowed to feel more at home because it was possible to perform daily-life activities, like cooking. In the military camps all this is impossible and for those who don’t know what their future will be, these aspects are far from negligible.

8.00 am, Idomeni – The eviction went on until evening, stopping only during the night. We are here, hosted by those Sirian families with whom we are sharing everything: bed, food and air. We are keeping a vigilant eye to document how the eviction is going on, to keep the lens open. All the press has been moved away, it’s not possible to film the deportation at close range, those images could bring back ghosts of history. We’ll stay here until we can, today the number of police officers has increased. They go around asking the people if they already packed their stuff because they all need to go, even from the railway blockade. Meanwhile, some families deported to the military camps let us know that the situation of those camps is awful – little water and few bathrooms, no electricity – and no one is telling them what’s going to happen.

6.00 pm – On the road leading to the Idomeni camp some volunteers of the independent groups, which have been helping the migrants for months along the Greek Macedonian border, are protesting against the deportation and the banishment of the volunteers and of the press from the area. The volunteers are denouncing with banners that the deportations are just a further violation of the migrant’s rights. The police is impeding to get closer to document and support the people during the operations of eviction. Since this morning not even the food and the milk for the kids is allowed into the camp.

3.30 pm, Idomeni – The operations of eviction are proceeding slowly. The refugees are giving us images that testify the departures of the coaches. Police is sweeping up the migrants tent by tent giving just the time to pick up one’s luggages. Doctors and volunteers have been moved away and the food distribution has been stopped. The same day in which in Istanbul there are discussions about humanitarian actions, during the UN World Humanitarian Summit, in Idomeni thousands of people are being deported to the military camps. The same ones the refugees always refused because in worse conditions and fearing of being deported to Turkey from there.

2.30 pm, Idomeni – There are no words to describe the solidarity shown by the migrants to the activists who stayed in the camp. All the people, with acts of respect and admiration, are offering their tent as shelter. Since yesterday night neither food, nor shelter have been missing. These people know what does it mean to be on the run and hide, and for this they agree even more with what we are doing here. We are forever grateful to them. We are here for them,but without their help it would never been possible.

12.00 am, Idomeni – The eviction and the deportation are going on very slowly. The police is still just in the first part of the camp. From today even doctors are not allowed in and the food distribution has stopped. Shortly it will be impossible to live here and people know this. Even the volunteers have been forced to pick up their materials and leave. The rest of the camp is quiet for now. A lot of people are packing their stuff to leave,but there are others who keep selling food and kids playing football. Trucks full with tents to throw away are leaving.

11.30 am, Idomeni – We have been told that the German reporter has been accompanied out of the camp and he has not been arrested. Many activists are monitoring the operations to document the evolution of the situation. The most critical point could be the removal of the tents on the railway.

10.30 am, Eko station – in this camp the situation is calm for now
In the small camp built in the gas station on the highway between Polykastro and Thessaloniki, where many groups of volunteers are active, the situation is calm. While in Idomeni a forced eviction is happening, with the deportation of thousand of people to military camps, here there is just one police car. We still don’t know if this settlement will be the next one to be dismantled.

10.00 am, Idomeni – The eviction of the first part of the camp is proceeding. The police forces, present in huge numbers, have not resorted to force till now. Many are deciding to hop on the coaches by their own will, since it’s not possible to do otherwise. The choice is obliged, one of the biggest deportation within the European border is taking place: thousands of people forced into military camps where they wouldn’t stay. Another repressive action from EU, with the support of the Greek government, against the migrants; an action which purpose is to make them renounce to keep on their travel. The signal is not just for them, but for all those refugees that might want to get to Europe.

9.00 am, Idomeni – Update from the camp, interview with Mustafa of refugeestv

8.00 am, Idomeni – The eviction of Idomeni has started. Yesterday night some undercover cops made the Bomberos, the independent clinic, leave the camp, while in this moment with the support of the army they’re evicting the Cultural Centre Idomeni, the school founded by the independent volunteers. It seems that the access has been denied practically to everyone. The number of forces is huge (we see 200 on a total of 1700 agents), that in this moment are evicting the first area of the camp without the use of force. The No Border WiFi station has been dismantled and the equipment has been brought out. Many coaches are ready to leave. In the rest of the camp the situation is quiet. 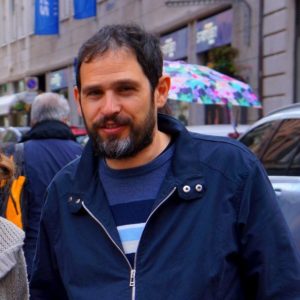 Regularisation: a draft of legal proposal unreasonable, inadequate and not compliant to the rule of law

The island of Lesvos under pressure from the Coronavirus, the militarisation and the neo-Nazi attacks